Sudan
by Luca Trevisani, Italy, 2016, 15′
Sudan lives in Kenya, protected by armed guards. He’s the last white rhino, the only one of his species to have survived extermination by poachers. The film is a profound moral analysis of the relationship between man and nature through investigation of ‘sculptural’ Sudan, a mortal work of art moving slowly on its way to extinction.
The Mesh and the Circle
by Mariana Caló and Francisco Queimadela, 2014, 30’
PRIZE Lo schermo dell’arte Film Festival 2013
A collection of visual testimony, linked to work and practices of everyday life in several regions of Portugal. The two artists have created a fragmented film, immersed in the idea of the transformation of material, capable of generating a whirling movement of connections and interactions which evolve over time. 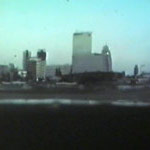 Mastequoia Opera 09-13
by Carlo Gabriele Tribbioli, Giacomo Sponzilli and Gabriele Silli, Italy, 2013, 64′
PRIZE Lo schermo dell’arte Film Festival 2012
Opera 2009-2013 was filmed over the course of three years in Rotterdam, Tokyo and Fez. Starting with a VHS JVC GX-N7E telecamera, the central instrument of the operation, the three authors planned, collected, shot, interpreted, and lived the various places and stories of the three cities. The  result is an enormous kaleidoscopic corpus of recordings, boiled down to a feature-length film in three episodes.
Per troppo amore: Incompiuto siciliano
by Alterazioni Video, Italy, 2011, 21′
PRIZE Lo schermo dell’arte Film Festival 2011
A psychedelic soap-opera set in the Parco Archeologico dell’Incompiuto Siciliano in Giarre. An ectoplasmic extraterrestial is forced to make an emergency landing on Planet Earth. A local shepherd looking for his lost flock becomes a UFO witness. In a euphoric panic, he runs into town to alert the local TV station.
Ladies and Gentlemen
by Luca Bolognesi, 2011, 21′
PRIZE Lo schermo dell’arte Film Festival 2010
Sir James Ephraim Lovelock is an independent scientist whose major achievement is the Gaia Theory, which suggests that planet Earth is a single living super-organism. The problem of global warming is seen as an imminent and inevitable threat to human civilization.

For more information on the films distributed by Lo schermo dell'arte, please send an email to Emma Paoli